I am an active composer, music teacher, and organizer of music events. I share an occasional Music as Meditation concert with listeners and fellow musicians and I organize several concerts of new music each year. I use this blog to tell people about my musical endeavors and as a home for my virtual busking basket. If you want to support my musical efforts financially, please look for the donate button on the right-hand side of this page. You can find pages about The Davis Hill Studio on this blog. Look for the orange links on the right-hand side of the page.

at the Little White Church in Eaton, New Hampshire 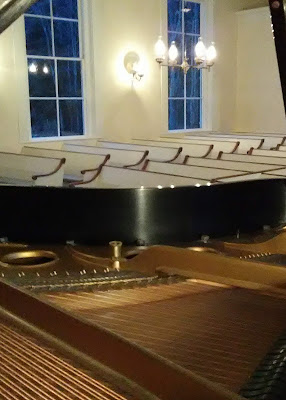 There is a newly-refurbished piano in our seven-town-universe. It's at the Little White Church in Eaton, New Hampshire. To share this grand gift of the community in Eaton, I'm planning an open piano evening on September 15, from 7-8:30 PM. An open piano evening is a lot like an open mic with some key differences. It's a piano, not a microphone. There won't be any amplified music at this event. There is some planning involved. People interested in playing need to contact me at ellen.m.schwindt@gmail.com. I'll be planning for a diverse program that will truly fit inside an hour and a half.  After all, September 15th is a school night.

I'm excited to offer this music opportunity to my fellow musicians and listeners in the community. As you might expect, if you've followed some of my work over the last several years, there will be classical music on the program. Anchoring it are two canonical pieces. Charlotte Gill and I will perform Mozart's piano and violin sonata, K. 304, composed in Paris in the early summer of 1778. It's one of my favorite pieces of music; perfectly proportioned and full of pathos. I never tire of returning to it. Maisie Brown, a teen pianist in my studio, offers us a chance to hear Debussy's Arabesque number 1, a piece sure to evoke memories of all the bubbling brooks you've had a chance to sit beside this summer.

Admission to this open piano concert is by donation. Donations will go to the support of The Little White Church and to the upkeep of the fabulous piano there. For more information, please contact me at ellen.m.schwindt@gmail.com or at 603-307-0825.

Posted by Ellen Schwindt at 5:16 AM No comments: 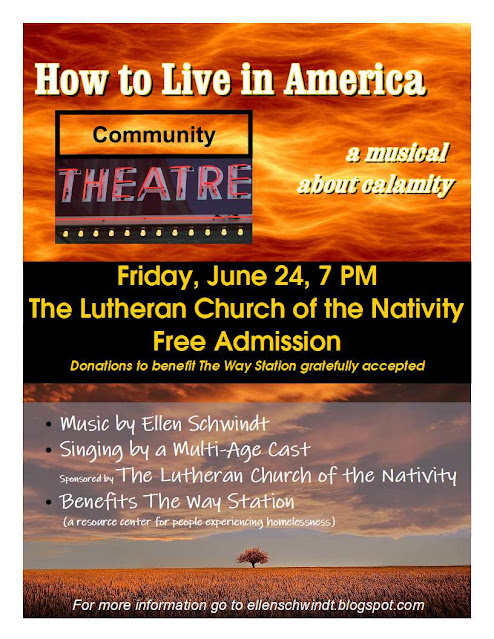 How to Live in America is a musical about three calamities we hear about all the time: homelessness, wildfire, and random gun violence. The plot follows three characters who experience each of the calamities first-hand. Virgil is a middle-aged professor turned reporter who is fired for saying the wrong thing. Vince is a young person who experiences homelessness; whom Virgil mentors as he works his way into a stable housing situation. Kristen is a young woman who loses her husband in an urban wildfire. The music deals with how these characters cope with their misfortunes. The play is meant to encourage us all to reflect on this question how do we live this heavy life with an easy heart and an open soul when every day there's trauma around each bend.

I am presenting this original musical in a performance on June 24th at 7 PM at the Nativity Lutheran Church at 15 Grove Street in North Conway, NH.

The performance on June 24th is the culmination of a collaborative workshop lasting a week. Musicians, cast, and crew will influence the final form of this musical—which is a work in progress. It is designed in a skeleton form with room for including individual stories. These stories will be woven into the play during a week of rehearsals. After this performance, I hope the play will be produced in other venues.

A cast and crew of about 20 people bring the musical to life. The talent showcased includes singers ages 11-ish and older; musicians playing guitar, bass, violin, and oboe; organizers; and a teen singer/songwriter.

I hope the workshop and performance will raise community awareness of the calamities we face, in particularly the problem of homelessness and housing insecurity in our own community. The Way Station is a resource center that can offer help to our neighbors in need. For more information, contact Ellen Schwindt at ellen.m.schwindt@gmail.com.

Posted by Ellen Schwindt at 11:25 AM No comments: 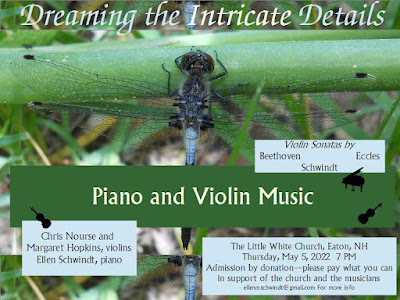 It's my good fortune to have friends who like to bring music to life. Margaret Hopkins and Chris Nourse, both fine violinists, join me to realize some beautiful music. The concert is planned for Thursday, May 5, at 7 PM at the Little White Church in Eaton. Admission is by donation. Donations will support the church and the musicians. The program presents a series of sonatas and a set of folk songs from the Slavic world.

Many years ago, Chris Nourse and I worked up our first Beethoven Sonata to perform at the Little White Church. Around that time, I asked him which Sonata of Beethoven's he wanted to play. His reply was “all of them.” We haven't yet achieved that goal, but we keep playing them. This particular Sonata, Opus 30, number 2, was written in 1802 and published in 1803.

More recently, I began to write in the Sonata form. Slowly, my writing got smaller and smaller. I've completed several sonatinas for various instruments and piano. These are much shorter pieces, using the same kind of fast-slow-fast format as many Sonatas. Two of my Sonatinas are on our program. One was composed in 2019-2020, and one in 2016.  You can give it a listen here. Margaret Hopkins helped me record the more recent one last autumn.

When Margaret and I first played together we talked about other pieces we'd like to try. One of these was a sonata published by Henry Eccles. Scholars think that this Sonata was mostly Eccles's own composition, but the second movement—the Corrente—came from one of Francesco Bonporti's Sonatas. Perhaps people in those days had more of a “share and share alike” attitude than is prevalent now. I was already familiar with this Sonata. I found it when researching Solomon Eccles, Henry's father, who was a famous early Quaker but burned his instruments when he converted to the new faith.

Because we all hope for peace, we will play some songs from the Slavic part of the world where violence is erupting. One is called “Storks on the Roof.” It asks for peace for the whole world, and for storks—a symbol of peace—to stand on every rooftop.

Posted by Ellen Schwindt at 4:16 PM No comments: 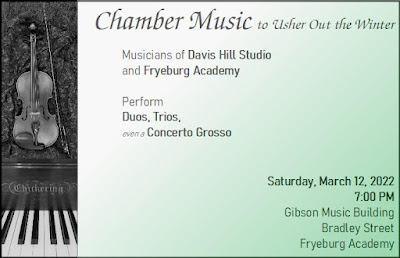 Listening to warm music performed with youthful friendliness is a great way to usher winter out the door. On Saturday, March 12, teen musicians from Davis Hill Studio and Fryeburg Academy perform a varied program of chamber music. Students have been learning their parts since the beginning of the school year, rehearsing together and enjoying each other's company while they craft worthy musical offerings.

A student duo interested in the hardest music available will perform Camille Saint-Saëns' “Danse Macabre.” The composer himself made this arrangement for piano and violin. Gideon Richard and Phuoc Bao Le perform it in style with lots of fire and warmth. Molly Della Valla and Maisie Brown created an arrangement of Paul Desmond's “Take Five” for piano four-hands. The piece has plenty of room for both girls' exacting personalities. Zoë Jung chose to study Rachmaninaff's famous song “Vocalise.” She will perform it on the cello with great feeling. She will be accompanied by the program organizer and teacher at Davis Hill Studio, Ellen Schwindt. Lou Tillmans and Gideon Richard will play the first movement of Bach's famous concerto for two violins.

A few of the students will play a solo or two to keep us from the cold. Among these is an elegy for winter by Cecile Chaminade, performed by Kaitlyn Sakash. This promises to be a concert not to miss, and it's being offered at free admission. The concert takes place in the Gibson Music Building on Bradley Street in Fryeburg at 7 PM on Saturday, March 12. Contact Ellen Schwindt for more information: 603-307-0825 or ellen.m.schwindt@gmail.com.

Posted by Ellen Schwindt at 5:39 AM No comments:

It's that time of year. The goldenrod are blooming. The harvest is coming in. It's time to get ready for the school year. Find out about Music Lessons at Davis Hill Studio by clicking the orange link on the right.

It's always exciting, even for the teacher, to start a new school year. This fall I'm looking forward to

We jump in again on August 30th. Get in touch with me soon to reserve your spot in the schedule.
Here's a calendar to whet your appetite

November 13—No Lessons at FA

Posted by Ellen Schwindt at 8:28 AM No comments:

This Forest is Alive

It's not an opera, not a science lecture, not a symphony, not a feature film…..

The first installment of this project is a video with spoken words, nature sounds, a fugue, and pictures of the forest. Robin's Song in Mixed Meter features a Robin diva along with a woodwind trio comprised of Doris Henney playing flute, Judith English playing clarinet, and Nancy Goldenhar playing bassoon. Remaining videos are in development and will be released every so often. Check back here for more. 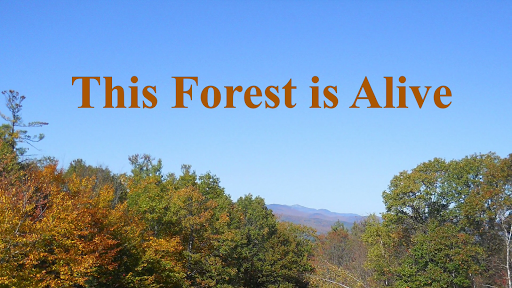 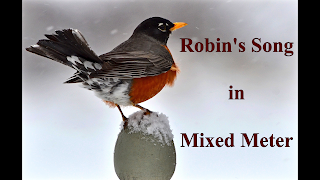 Lots of people responded to the first video with ideas for further reading. I am compiling a bibliography to further our corporate understanding of forests and our place among them. If you have something to add, please let me know. Please get in touch with me if you want to contribute visual art to this project. You can find my e-mail to the right of this page.

Posted by Ellen Schwindt at 6:57 PM No comments:

Lessons for Children and Teens

It's time to sign up for Winter/Early Spring music lessons. I'm planning a “trimester” approach this time around. I hope that will offer everybody some flexibility. I'm hoping to travel out West when the weather and the pandemic allows.

The Winter/Early Spring Term will run from January 4 to April 17. That covers 16 calendar weeks. I'll plan on teaching students 14 lessons over those 16 weeks—with a two-week cushion for flexibility.

The cost for that term, for 45-minute lessons, is

I recognize that everybody's financial situation is different, so if these rates don't work for you, please talk to me. I teach because I want to, and although I need to make a living at it, I have found ways to make it work for a lot of people in different circumstances.

To cover the rest of the school year and the summer, I'm planning a Late Spring Term that will begin May 3 and end June 12, and a Summer Term that will span July and August.

Posted by Ellen Schwindt at 8:10 AM No comments: